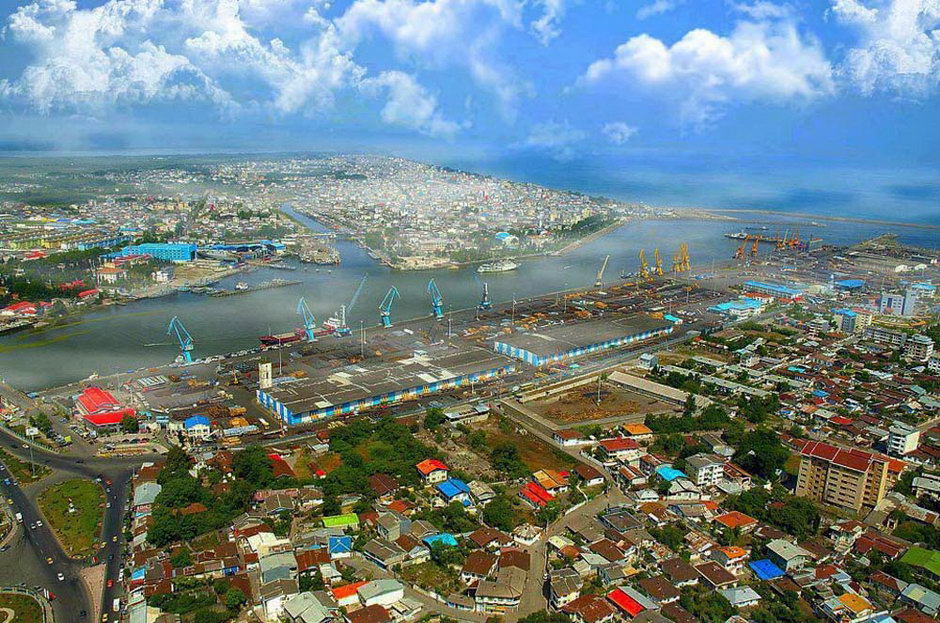 Unquestionably, since the first habitants resided in the Caspian Sea's coasts, they dealt with the sea and turned to the construction of yachts, vessels, sailing boats and commercial ships in order to travel across the waters, transact and interact with the neighboring tribes and derive benefits from the maritime resources. The Gulf of Anzali has been given attention by the mariners from two viewpoints: 1) Natural situation of the Gulf of Anzali and Anzali canal 2) The geographical location of Anzali and its closeness to the commercial centers of Guilan. This port which was under the administration of Russia was handed over to the then-state officials in 1928. The first vessel from Europe was brought to Anzali in 1923 by the Germans. The construction of Ghazian 750-meter long breakwater and Anzali's 520-meter long breakwater started on 1895 (year 1274 of Solar calendar) and ended in 1914 (year 1293 of Solar calendar) in conclusion.

The advantages of investment in Anzaliport free trade zone

1- Benefiting from the legal advantages of investment in the special economic zones
2- The freedom of participation and investment for the nationals and foreign citizens
3- Guaranteeing the security of foreign capitals and their resulting interests along with the absolute freedom of capital flow
4- The exportation of goods without customs formalities; the possibility of transiting, transshipping and re-exporting the goods
5- Direct connection, through railway and roadway, with the Central Asia, Far East, Russia and Northern Europe
6- The possibility of surrendering lands and warehouses with competitive prices to the applicants and investors in short-term and long-term plans (as demised premises)
7- The possibility of importing raw materials to the zone without customs formalities and processing and re-exporting the goods correspondingly
8- Benefiting from the advantages of railway and modern equipments of loading and unloading in the special economic zone
9- The possibility of importing and employing machinery, spare parts, transportation vehicles and required raw materials without paying taxes and customs duties in the zone

The advantages and legal facilities of special and free economic zones

1- The possibility of importing and exporting goods (to process, convert and complement) without paying customs duties and commercial interests
2- Exemption from the payment of inlet dues for the products manufactured in the zone (equivalent in worth to the total added value and the value of raw materials and mechanical parts used in the product) while importing to the country
3- The freedom of participation and investment for the nationals and foreign citizens with the certification of invested capitals and their resulting interests with the absolute freedom of capital flow
4- Surrendering or vending all or some fractions of the imported goods to the other parties, using negotiable instrument
5- Issuing the certificate of origin acceptable for all of the banks in the country
6- The unrestricted and duty-free importation of machinery, spare parts and raw materials to employ in the zone
7- The possibility of transiting and re-exporting the goods which are imported to the zone without customs formalities

The advantages of investment in the free trade zones

1- The possibility of investment by the domestic and foreign investors to unlimited extents
2- 15-year exemption from income tax and properties tax to those who obtain a certificate of economic activities
3- Guaranteeing the security of foreign investment and its resulting interests in the free trade zone according to the Encouraging and Supporting the Foreign Investment Law of March 10, 2002
4- The freedom of capital flow in the free trade zone according to the law aforementioned
5- The importation of machinery, spare parts and transportation vehicles, raw materials and construction materials in order to build manufacturing, financial, services and residential units and carrying out infrastructural activities in the zone without paying the custom duties and commercial interests to the zone
6- Customs exemption for the importation of goods manufactured in the zone to the country (equivalent in worth to the added value and materials used in it)
7- The possibility of establishing Iranian banks or credit institutions in the zone with domestic or foreign investment, according to the relevant regulations

1- Benefiting from tax exemptions
2- The possibility of domestic and foreign investment, participation
3- Benefiting from special labor and social insurance regulations for the employment of foreign citizens
4- The possibility of establishing and operating Iranian insurance companies, banking and credit institutions with domestic or foreign investment
5- Doing the foreign exchange transactions and transmissions through individuals and legal persons
6- Determining the selling and buying price of foreign currencies and changing them into Rial
7- The possibility of transiting and re-exporting the goods without limitations
8- The possibility of being involved in retailing job for the Iranian and foreign citizens
9- Customs exemption for the importation of goods produced in the free trade zone to the country in proportion to the added value
10- Issuing the certificate of origin for the products which are exported from the free trade zone

Chand manzoureh cooperative company, Kaveh, Arya banader-e- Iranian and Oghianous-e- Aabi Co are in charge of preservation and maintenance operations of the strategic coastal equipments of the Ports and Marine Administration of Guilan Province along with the activities related to loading and unloading in the port. 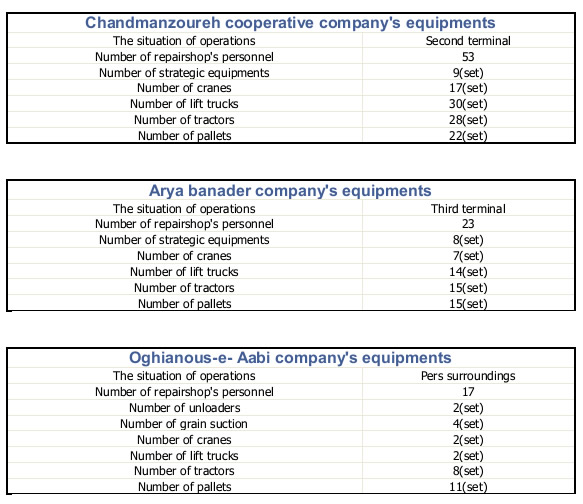 All of the maintenance and preservation operations are done by the technical unit of this company; however, in certain cases where specialized experts are needed, the equipments would be repaired with the collaboration of manufacturer companies or their authorized representatives throughout the country.

vigation system and maintaining the maritime equipment of the Ports and Marine Administration of Guilan Province including the sediment collectors, tugboats, towboats, yachts and buoys.

All of the maintenance and preservation operations are done by the technical unit of this company; however, in certain cases where specialized experts are needed, the equipments would be repaired with the collaboration of manufacturer companies or their authorized representatives throughout the country. 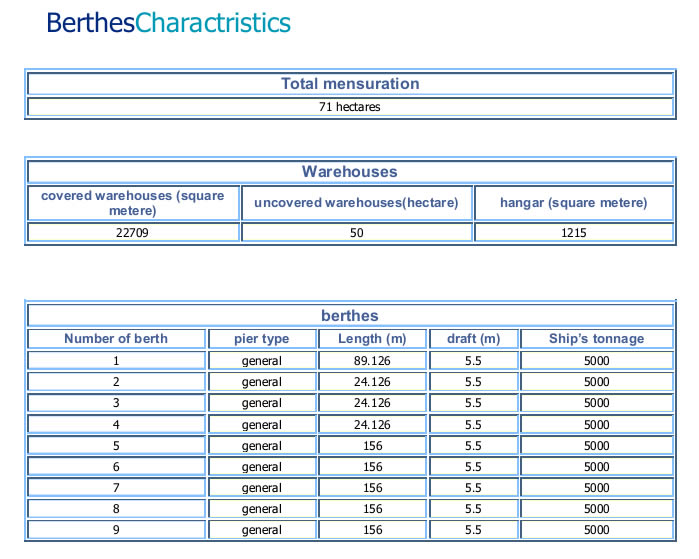 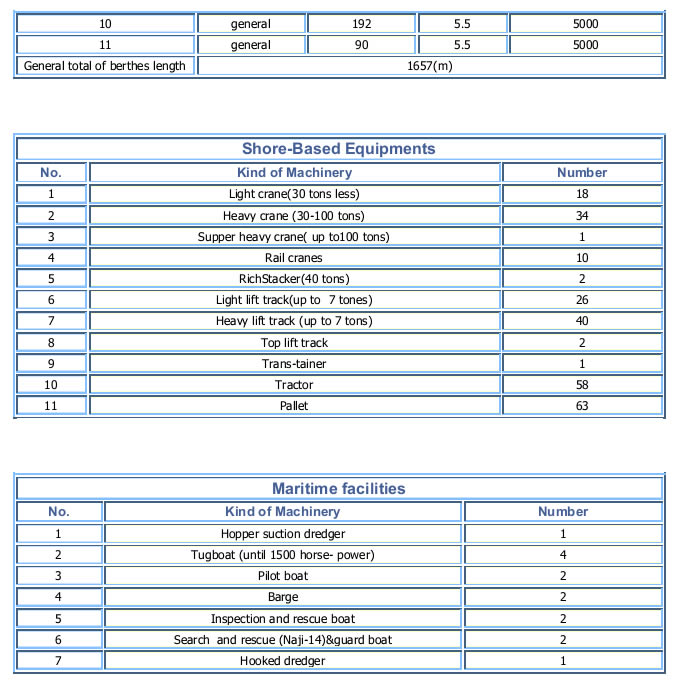 No category
Operator
Comments are closed